This time last week, I took the train home to Newcastle (can I call it home? Jury’s still out) to say goodbye to my dog and best friend of thirteen years, Holly.

I was ten years old when, as a family, we decided to get a dog. The breed was pre-determined thanks to my younger sister’s obsession with the film ‘101 Dalmatians’, and in September 2002 we brought home the little white ball of energy we had christened ‘Holly’.

In all honesty, ten-year-old me wasn’t really that enamoured with the idea of getting a dog. I mean, I wasn’t against the idea, I was just a little apathetic towards the whole thing. But as soon as she crossed the threshold, I was smitten. A lot of the responsibility around taking care of her, particularly taking her for walks, fell to me as the eldest child of the family, and it was out on our walks where we really bonded and became friends.

When I turned thirteen, I got myself (okay, I was talked into getting myself) a paper round at a local newsagents on a Saturday and Sunday morning. Initially, I took my bike, but it didn’t take long for me to figure I could kill two birds with one stone and take the dog with me on my route. She used to love it, and the friendly old folk who were up in time to greet the paperboy loved her too. We kept up the paper round for a good few years, until I turned sixteen and got a proper job that paid more than six quid a week.

By this time, she was used to me taking her out on long walks, to the beach in Seaton Sluice, or to see family in Bedlington. It was around this time that our family bought a caravan for weekend trips up the coast near the northern tip of Northumberland. Despite not being the best traveller, our Holly probably loved this more than anyone else. We’d spend hours exploring the sprawling empty beaches around Holy Island and Lindisfarne across the railway tracks from the caravan park. 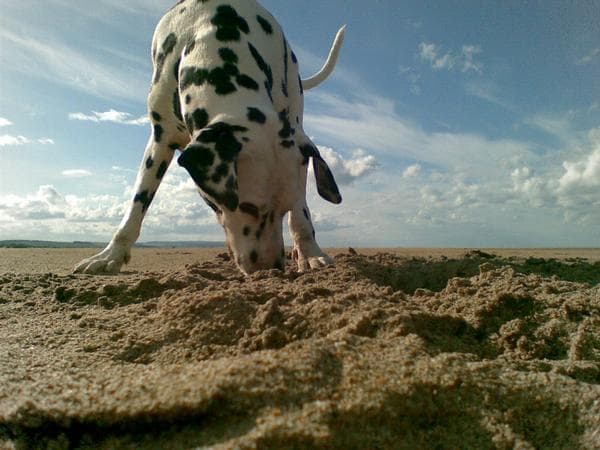 At the beach near Goswick, August 2008

After we moved the caravan to a new park 30 miles south along the A1 a few years later, we had to find new places to explore. At one point we tried to walk to Alnwick, which I thought was closer than the 10 mile walk it actually was. We got lost in some fields, Holly trying to get us killed by barking at a herd of rampaging cows. We escaped from that one thanks to a conveniently-placed stile, not that Holly was any help, hiding behind my legs as the cows approached. After that, we tended to stick closer to the park to avoid any more close encounters with charging farm animals.

It wasn’t too long after this that I moved out of the house we grew up in for the first time, aged 19. Not that Holly would mind; I only lived a couple of miles away, so I was home often enough, and I brought her to the new flat so she could run around on the field outside and chase the geese who lived there. We still went out for long walks, albeit less often as I was working 20+ hours a week alongside my studies. Now that I can’t see her anymore, I wish we’d had more time together, but at the time my priorities were different. She’d always been there, and she’d always be there in the future, right? 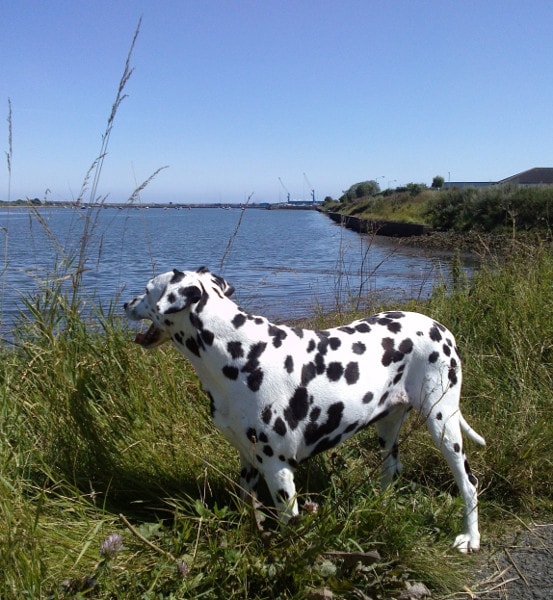 Walking near the River Blyth, July 2014

It got harder after I moved to Edinburgh after university. Our time together changed from every couple of days to every couple of weeks. I don’t regret moving up here, but I do wish that it didn’t come at the expense of losing touch with Holly. She was always still excited to see me, and we still went for our walks down by the river, but they weren’t the regular occurence that they used to be.

Around this time, she started to slow down. She was pushing 12 years old when I moved to Edinburgh permanently, and she didn’t want to walk as much as she used to. She visited my first flat in Edinburgh a few times, but she struggled with the stairwell, and had to be carried up and down the three flights of stairs each time. Her inquisitiveness had started to slow down too; where she would have once been all over the garden, digging through my neighbours ornaments, she was now content to have a slow wander around, calmly sniffing without a great deal of interest. She fared better with our new ground-floor flat, but by the time she came to visit, she’d started to grow weak, and couldn’t quite manage tiled or laminate floors very well.

If I could, I’d have kept her around forever. Not the old girl that she became; she wouldn’t want me to remember her like that. She’d want me to remember the best friend that came on adventures with me for so many years, the wild child who chased anything bigger than her but came running when they chased back, the constant presence who defined my childhood and adolescence with her unconditional affection.

I’m going to miss you Holly. Thanks for being such a good friend.