Last Thursday, I spent the night in Glasgow at the SSE Hydro watching funk-rock legends the Red Hot Chili Peppers as they toured with their latest album The Getaway. As one of my three favourite rock acts of all time, I had naturally been looking forward to this for quite a while.

To preface, I have no real business reviewing anything musical. As most people who know me can attest, I have the musical skills of a traffic cone, and probably just as good an ear. That said, I have been listening to the Chili Peppers for as long as I can remember, so what I lack in solid aural skills I at least make up for with sheer perseverance and volume.

The Red Hot Chili Peppers 11th studio album, The Getaway (2016), was released in June of this year - the band’s first album in five years, since the not-quite-classic I’m With You (2011). Tickets to their tour included a free download of the album (or as a physical copy for £3 postage), so it has naturally been played through quite a few times in the last couple of months.

At first listen, you can hear the undertones of vintage RHCP, although the wilder and more ambitious aspects of recent albums like Stadium Arcadium (2006) or By The Way (2002) feel a little muted and restrained. It feels more post-rock Radiohead than funk-rock Chili Peppers at times, no doubt heavily influenced by the choice to replace producer Rick Rubin with Danger Mouse of Gnarls Barkley fame. Rubin produced two decades of music with the Red Hot Chili Peppers, all six studio albums released by the band in the ’90s and ’00s - Blood Sugar Sex Magik (1991), One Hot Minute (1995), Californication (1999), By The Way (2002), Stadium Arcadium (2006), and I’m With You (2011). Not that this is a bad change per se, just a different sound than I’ve come to expect from a Chili Peppers album.

It’s a great album overall though, an album that feels like the line-up has hit their stride. On the last studio album I’m With You (2011), new-boy guitarist Josh Klinghoffer was relegated to an almost background role, as though long-time members Anthony Kiedis (vocals) and Flea (bass) didn’t quite trust him yet. Not so on The Getaway; while he’s not quite at the technical level of his predecessor John Frusciante, he’s still more than earned his place in the band.

Lyrically, the album is, as expected, all over the place. From a lyricist in Kiedis that has produced such gems as “Can I smell your gasoline, can I pet your wolverine” - This Is The Place (By The Way, 2002), and “Naked in the rain with a killer whale, I can taste the salt when I lick his tail” - Naked In The Rain (Blood Sugar Sex Magik, 1991) among many, many others, this album by comparison almost makes sense in parts (for context, I originally had 17 of my favourite seriously-mate-I-want-some-of-what-you’re-smoking RHCP lyrics here, and it took me about 15 minutes to narrow it down to just two).

The opening verse of the first single Dark Necessities reads “Coming on to the light of day, We got many moons that are deep at play, So I keep an eye on the shadow smile, To see what it has to say”, which sets the tone for the rest of the album fairly well. In all honesty, the scariest part is that when you’re listening, it feels like it makes sense. Until you deconstruct what words Kiedis is actually using, you can quite easily nod along in agreement: “aye mate, I feel you”.

Overall, it’s a very good album. Definitely an improvement on I’m With You (2011), although maybe not quite at the heady heights of the iconic Blood Sugar Sex Magik (1991) or Californication (1999).

In perhaps the strangest choice of support act I’ve come across, the Red Hot Chili Peppers were supported in Glasgow by Japanese kawaii-metal trio Babymetal. Prior to buying tickets, I’ll admit I hadn’t heard of Babymetal, despite the teenage girls amassing over 200 million YouTube views. Singing entirely in Japanese, the frankly bizarre mix of cute J-Pop choreographed-schoolgirl-dancing with a thrash metal backing band with their faces painted like corpses is an experience that I was not expecting to come across in my lifetime, much less enjoy. And they are enjoyable, albeit a little strange. Their closing song at the Hydro “Gimme Chocolate!!” from their 2014 self-titled album is one of the catchiest metal songs I’ve ever heard, as is the more serious “Karate” from their 2015 album Metal Resistance. As is the case with many support acts, Babymetal did not have the crowd they deserved in the SSC Hydro last week; but I have no doubt they’ll be back in future as leads.

This gig ticked off the second of three bands from of my rock bucket list (Bon Jovi in the summer of 2011 was first, leaving only Aerosmith to go). However, after receiving lukewarm reviews after their last visit to Scotland a few months ago at T in the Park, I wasn’t sure what to expect from the Red Hot Chili Peppers, and in all honesty was fully prepared to be underwhelmed; but the band did not disappoint.

After their typical instrumental opening, in which the overly-energetic bass legend Flea threw himself about the set with the litheness of a man half his age, Kiedis took the stage to open with their 2002 single Can’t Stop (By The Way), followed immediately by Dani California (Stadium Arcadium, 2006) and the iconic Zephyr Song (By The Way). A trifecta of hits to rouse the packed Hydro, before launching into The Getaway’s number one single Dark Necessities.

The Red Hot Chili Peppers brought with them an innovative lighting rig, with about a thousand light cylinders suspended from the ceiling, raised and lowered and changing colours to complex rhythms as the music changed. It added a key atmospheric element to the otherwise cavernous Hydro; not that the Chili Peppers were ever really in danger of failing to fill it. 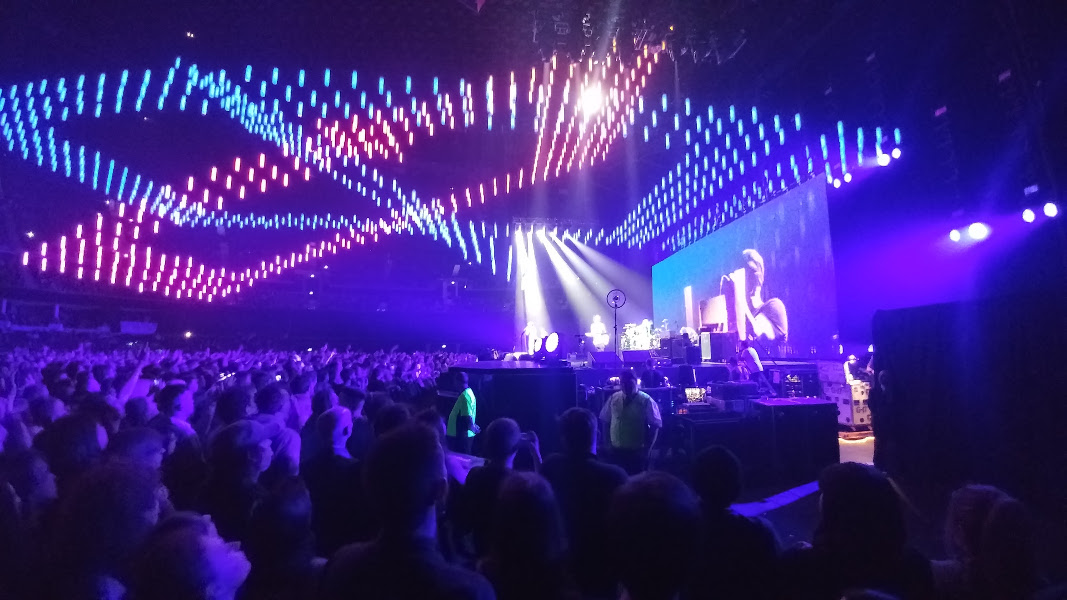 There has been some criticism of the band due to their insistence on changing the setlist they play between gigs, as it can sometimes mean they end up playing obscure tracks ahead of fan favourites; not so in Glasgow, as they followed their Getaway tracks with another three classics to end the night: Higher Ground (Mother’s Milk, 1989), Under the Bridge (Blood Sugar Sex Magik, 1991), and closing out with By The Way (By The Way, 2002).

Throughout the night, there was a solid coherence between the band members. Flea proving once again why he’s one of the all-time great bassists with his pure energy and customary bass-slapping, Kiedis also belying his age with a topless encore and boundless enthusiasm for the crowd and his bandmates. Chad “Ferrell” Smith was faultlessly majestic on the drums, and relative young boy Josh Klinghoffer (at 37 he is 17 years younger than Flea and Kiedis) perfectly emulated Frusciante’s solos while adding his own RHCP stamp on the newer songs.

Altogether, the Chili Peppers lived up to their well-earned reputation developed over the last 30-odd years. With performances like this, there’s no reason for them to slow down yet.