Over the last couple of weeks, Charlie and I have been attending “puppy parties” hosted by his vet to help with his socialisation. Up until recently, when I started seriously researching adopting a puppy, I had no idea just how important good socialisation was for young dogs.

Since the day Charlie moved into the flat, he has been constantly exposed to as many new situations and experiences as possible, to allow him to grow and mature into a well-rounded young dog. This has proved a little difficult, given the safety concerns prior to completing his full vaccination schedule (fully vaccinated as of May 20th!), but he’s done well with this restriction.

The first big question I had when I started - what exactly does it mean to socialise a dog? Essentially, socialisation is simply introducing the puppy to new events, environments, situations, and most importantly, other people and animals.

During puppyhood, from birth up to about 3-4 months of age, puppies explore the world with very little fear. During this window they are inquisitive and open-minded, and will approach new situations willingly. It is important to utilise this period and introduce puppies to a wide range of new people and animals, experiences such as the vets, bus rides, car rides, visiting the shops etc.

After this window closes, puppies will start to approach new situations with caution and sometimes fear, which can manifest itself in aggression. The puppy could become anxious and stressed; the leading cause of death in young dogs is euthanasia due to behavioural problems, a lot of which could be avoided with a solid base of socialisation.

Every other day since coming into our home, we’ve taken Charlie out for a walk to a new place; the supermarket, the park, the golf course, the pet shop, the river. Prior to completing his vaccinations, he had to be carried everywhere, but he was still allowed to meet people to pet him, and meet other dogs that had already been vaccinated.

Since starting his socialisation, I would estimate Charlie has met about a hundred and fifty new people and at least thirty new dogs. He’s also driven home to Blyth and back with me twice, stayed in a strange house with another dog, taken the bus and the train, been to the golf course, the pet store, the vets (obviously), multiple supermarkets, many houses both with and without animals, the dog park, the river, the beach, the public park, underpasses, overpasses, bridges, rose gardens, footpaths, cycle paths, roads, on concrete and tarmac, on grass and on stones, on sand and on soil. Hopefully it’s enough, but it’s also an ongoing challenge to find new things to expose him to.

Now that he’s allowed to walk outside with us though, this has definitely gotten easier. Every morning, we take a walk around the cycle path near to the flat, which inevitably means meeting a lot of other dog walkers and commuting cyclists. He spends a lot of time off-leash, allowing him to interact with others at his own pace. Which tends to be a hundred miles an hour, but I suppose that’s to be expected with a Border Collie. He’s already becoming a friendly and sociable dog, which will hopefully continue on as he grows. 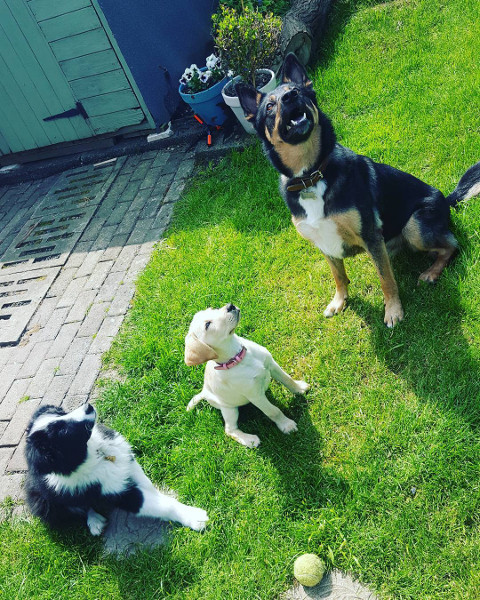 Charlie, with his new friends Penny and Barney.