Tonight was Charlie’s final session of his six Level 2 training classes held out in Livingston. He’s learned a lot over the last month and a half, although as he’s reaching his adolescence it sure is hard to tell at times.

As with his puppy training, Charlie had little trouble picking up most of the skills and tricks we learned at his class (with the notable exception of the emergency stop, but he is getting there slowly). It helped that a lot of his new skills are fun for him too, and help stimulate his mind; something that can be a struggle for non-working Border Collies.

His training classes were again at Karen’s DOGS, although this time he was joined by only two other dogs; a calm and gentle whippet called Saffy (who he absolutely adored), and an energetic golden Labrador named Millie (who he could not stand). It was unfortunate that he didn’t get on with her, as it curtailed the socialisation aspect of his training classes, but I couldn’t really fault him; Millie was incredibly full-on and, as she was twice the size of him, I don’t blame him for being wary.

Unlike with his puppy training, most of the tricks he learned were new to him (target training being an exception, as he already understood the command ‘cage’ to mean ‘go to bed’). Among other things, he’s learned the basics of scentwork which he seems to enjoy immensely; it does have the unfortunate side-effect of making the flat smell like catnip. We don’t play that game very often.

Along with scentwork, he’s learned off-leash heel, incorporating stopping for turns, working in distracting environments, impulse control, emergency stops, target training, informal tricks (spin, walk backwards, crawl), and advanced distracted recall. Within the confines of the industrial unit that we train in, he’s fantastic at all of these; however, in the ‘real world’ he isn’t quite so great. His teenage months are starting, and the world is just waiting to be explored, and it’s all much more exciting than I am. Even now, we’re having to relearn the basic loose-leash walking; Charlie learned loose-leash walking with his harness, but he does not cooperate when his leash is on his collar. This would be fine if he didn’t hate his harness with a passion, and cower in the corner every time it was brought within ten feet of him.

So all in all, his progress training has been great stimulation for him, if not terribly useful for the duration of his adolescence. That’s not a criticism of Karen, she’s been a fantastic trainer, but it looks like it’s back-to-basics for Charlie for the next couple of months at least. Staying patient with him is a challenge for us in itself, but when his hormones calm down, we’ll nail down everything he’s learned. As a consolation prize though, Charlie did win the ‘best trick’ competition in his final class last night, for the ‘hug’ command I taught him. Tiny triumphs, eh?

We won’t be going straight into any more training with him yet, as it won’t be beneficial until he’s mastered what he’s learned so far, but I do want to take him to agility and advanced training in the New Year when he’s back to normal (agility training can’t start until Charlie turns a year old anyway, as he needs to wait for his bones and joints to fully develop, so as not to damage or injure him as he grows).

Overall, the last few months at his puppy and progress training have been enjoyable for both of us, not least because Charlie is wiped out by the time we get him home. The next few months are going to be trying, but hopefully he’ll remember what he’s learned, and when we come out the other side of his adolescent stage he’ll be ready to learn even more. 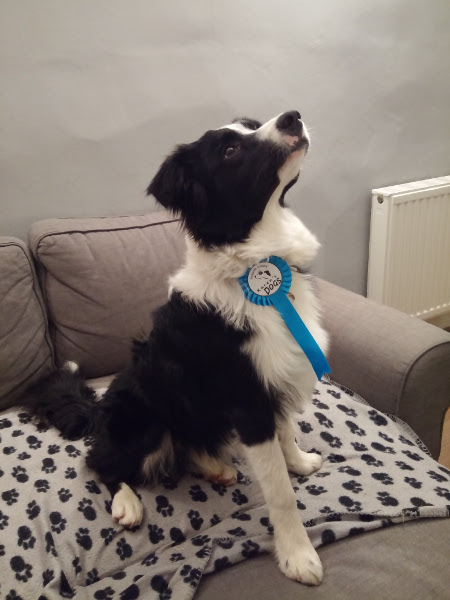 Charlie with his graduation rosette