Each Saturday morning for the past couple of months, Charlie and I have taken the tram and then the train to Livingston to attend his puppy training classes. The hours after we get home, when he curls up next to me and goes to sleep, is the only quiet time I get all week.

Tomorrow, it will have been fifteen weeks since Charlie came home to live in the flat. I can’t decide if that’s an incredibly short or an incredibly long period of time. I don’t really remember what the flat was like without him here, but at the same time, it’s been just over three months - hardly eons. In those three months, he’s changed from a nippy little baby to a well-trained (if not always well-behaved) adolescent dog.

Most of the training we’ve done has been one-on-one, me and him. His training classes have been more for advice, helping with his socialisation, and practising his behaviour in the presence of other excitable puppies; there’s a big difference between a recall command in the garden with no distractions, and a recall command while he’s mid-wrestle with four other puppies.

There are four other dogs who attend classes with Charlie on a Saturday morning: a black Labrador named Phoebe, Walter, a Shih-Tzu cross, a Labradoodle called Maisie, and Molly, a Cocker Spaniel. Charlie is by far the biggest puppy there, given his breed and slightly more advanced age, and sometimes I don’t think he really realises how big he is compared to the other puppies.

Going into his classes, Charlie had already mastered the basics, so I wasn’t concerned about him not picking things up, or struggling with anything that would be asked of him. His training sessions started off by getting the puppies used to the environment, and practising or learning the basic commands. We covered sitting on command (“sit”), focusing on me (“eyes”), and a simple nose-touch on my hand (“touch”). Charlie picked these up easily enough, and from then on these commands were used as warm-ups whenever we started a training session.

As the weeks progressed, Charlie also learned other important commands, including lying down (“lie down”), standing up (“up”), settling and staying calm (“settle”), leaving items alone, or dropping items (“leave it”), and waiting after sitting or lying down (“stay”). We also practised his recall (“come here”), which was already at a high standard given his age.

More importantly, Charlie also learned to walk on a loose leash (i.e. not pulling), and also how to calmly interact with other dogs whilst out exploring. He’s also learning to walk away from dogs when called, even if he is in the middle of a play session or a chase; we’re not 100% there with this yet, but the majority of the time he will come when called. We also covered handling and grooming techniques, but as he’s a confident and outgoing dog already, these didn’t prove to be any real challenge for us to master.

Charlie has learned a lot at his classes, but more importantly seems to enjoy them immensely, so I’ve already signed him up to do some advanced training starting in September. 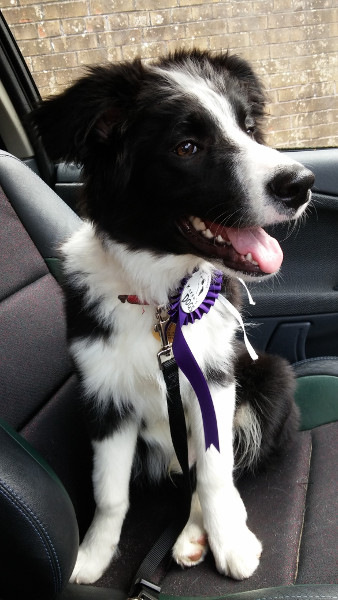 Charlie with his graduation rosette

Charlie’s puppy training (and his upcoming Progress training) is with Karen’s DOGS in Livingston, and I would highly recommend her as a trainer.