Despite the drinking, we still made it back relatively early; our killjoy captain insisting on a good night’s sleep before the knock-out phase in the morning. We woke fresh, and made our way to the stadium to find we’d been drawn against the free-scoring Portuguese side AMS - they’d won their group games 5-0, 5-0, and 3-0. This did not bode well for our defence.

The Portuguese side started strongly, but did not enjoy the physical side of the game, particularly when they ran into trouble with our holding central defensive midfielder. No bad challenges, just strong physicality which rattled the strikers, and it didn’t take long for them to start a steady stream of complaints to the referee in Portuguese. It soon became clear that this was a very one-sided team we were up against, with a technically-gifted front line, but a shaky defence, likely so far untested. Our defence stood strong against their attacks, and when we played long balls their defenders struggled to clear their lines and deal with it, and it wasn’t long before we scored the opener, a long ball latched onto by our centre-forward and played low across the box for a simple tap-in for our left winger. 1-0 Scotland - the first goal conceded by AMS all tournament.

Given the quality of their defence, I imagine that this was more due to their forwards preventing any attacks from starting rather than their defence working well together. After the goal, the Portuguese side regrouped, dropping a winger into central midfield to protect the defence, and allowing the remaining three up-front to cause havoc. In turn, we sat deep and absorbed the pressure, and held on until half-time - thanks in no small part to our goalkeeper, pulling off some fantastic saves. 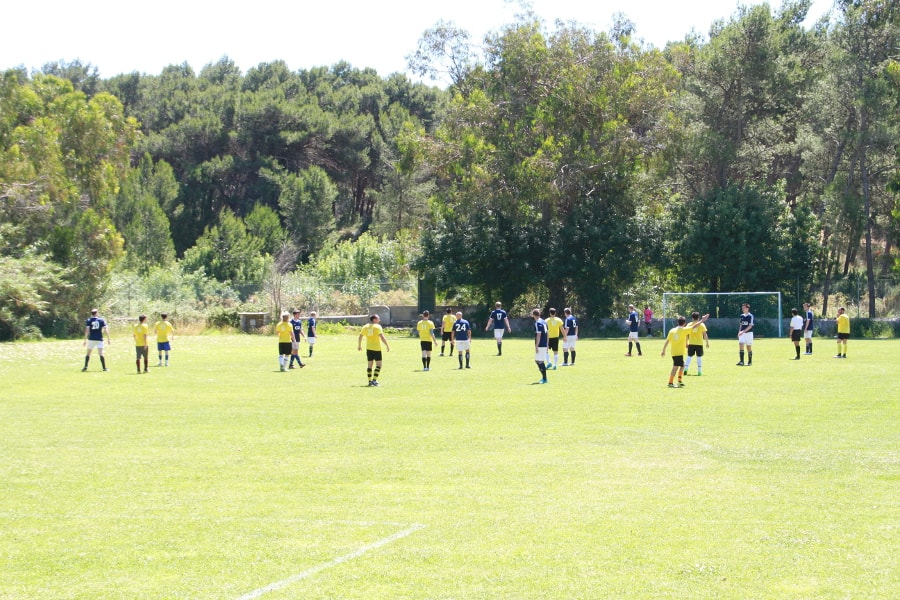 Holding our positions against AMS

The second half started much the same as the last, with Scotland looking to hold the ball up and see the game out, while absorbing the pressure from the AMS attacks. Our opponents switched to a lone striker formation, choosing to play the ball through the ranks, rather than try to play high balls against our towering back line. This worked in our favour, and we defended extremely well until the very last kick of the game, when we were split open by a mis-hit through ball, which landed at their strikers feet and he dispatched the shot into the bottom corner. 1-1, and a very frustrating end to a game in which we had held out for so long.

We didn’t have long to feel sorry for ourselves though, as extra-time started almost immediately. The Portuguese rallied, and searched tirelessly for a winner against our demoralised back four. Scotland, however, showed our resolve, saw off the AMS attacks, and played the extra-time out to penalties; our first shoot-out of the new format CGI Euros.

To their credit, we had no shortage of volunteers to take a penalty. After selecting our five players and the order, we all held our breath and waited for the shoot-out to begin. Scotland won the toss, and elected to shoot first. Up stepped our left-back, and duly dispatched his penalty into the bottom-left corner. 1-0 Scotland.

AMS responded in kind with a high penalty into the top corner. 1-1. Our striker, yet to score in the tournament, fired his penalty into the same corner to send Scotland 2-1 ahead. AMS’ striker followed suit, levelling the shoot-out at 2-2, no misses so far. Up stepped our central midfielder, with a short run-up and… he pulled it wide! Still 2-2, AMS had the chance to go ahead with their third penalty.

We celebrated as though we’d won the World Cup. Into the semi-finals, and guaranteed at least a fourth-place finish. Is this really happening? This is Scotland playing football after all.

Our celebrations were short-lived, however, as we learned that we’d drawn the tournament favourites, London, in the semi-finals. London, Frankfurt’s 3rd-place finishers, had won all of their games leading up to the semi-final, and were widely regarded as the most technically-gifted side participating in Lisbon. Losing to them would be no shame, but undeterred, we set up for the same formation of 4-1-4-1, switching our strikers and resting parts of our defence.

It paid off immediately, as we scored from our first corner of the game in the opening minutes. London, it seemed, had underestimated this Scotland side, and weren’t expecting this game to be much more than a formality. We had awoken the beast, and prepared ourselves for the inevitable onslaught. We had a 1-0 advantage though, and we were determined to hold onto our lead. We split the central midfield to help the defence, and began playing essentially a 4-2-3-1 formation. It paid off, as a combination of distance strikes off-target and some solid defending kept the scoreline the same for most of the first half. 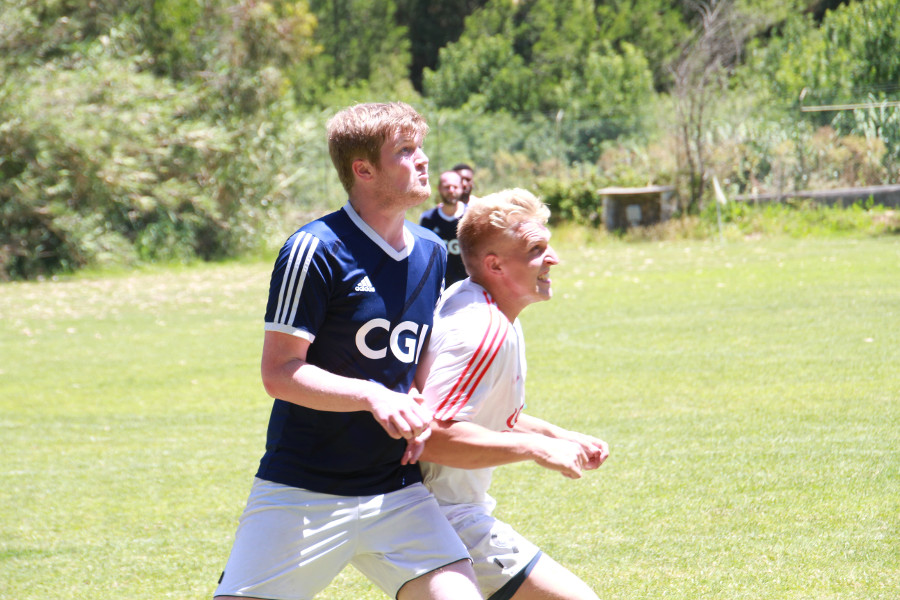 Defending a high ball against a London attack

We were pinned back with wave after wave of attacks, barely getting the ball out of our own half. After we lost the ball in a rare counter-attack, London showed their pace with a ball over the top taking our full-backs out of the game. Two vs two, I showed their striker the wing, but a fortunate bounce from the tackle sent him away on a run into the area. He pulled back to try and cross to his strike partner, but his pace threw him off-balance, and he sliced the ball, wrong-footing our goalkeeper as the ball trickled painfully into the net. 1-1.

We feared the worst after this, expecting an even bigger onslaught as London chased the winner, but we held out until half-time, going in at the break level at one-all. The first half had taken a lot out of the defence - there was much dry-heaving and painful muscles as we prepared for the second half. We weren’t used to running quite so much.

After some deep breaths and lots of rehydration, we headed back to the field to face a London team who obviously were not prepared to lose this game to the inferior Scotland side. They launched straight out of the blocks in the same fashion; any full clearance greeted with relief from the back four for the respite from the London attacks. We identified that the biggest asset to London was their set-piece play, so limiting those opportunities became a big part of our game plan. Keeping them out on the wings and in the midfield was ideal for us. Long shots are easily dealt with.

Our defence held firm, and we saw the game out, exhausted but successful. We requested to take the game straight to penalties (the tournament rules allowed skipping extra time if both teams agreed); London however, sensing our exhaustion, declined. They wanted this finished on the field, not from the penalty spot. We were a genuine annoyance to them, having seen us as an easy route to the final (not an entirely unfair assessment, given our past results).

Extra time started, with yet more full-on attacks on the Scotland goal. As a team, we stayed solid, and despite the pain and tiredness, refused to bend to the will of the powerful London side. As the game drew on, the London players began to show the strain, with stressful yells between teammates displaying their frustration. This only willed us on, and we somehow managed to keep them out for the entirety of extra time. They must have created 40 chances to our 4 over the course of the game, but the important result was level. 1-1. Time for more penalties.

We selected the same five penalty takers in the same order as those who had dispatched PT AMS in the quarter-finals. Our left-back once again put Scotland’s first penalty safely into the bottom-left corner, 1-0 Scotland. London’s first penalty was also cleanly put away to level the scores at 1-1. Our striker stepped up for his second penalty of the tournament, pulled the trigger and… the keeper gets a hand to it! But the shot is too strong, and goes in at the side netting! Hearts in mouths, but Scotland are 2-1 up! London send up their midfielder for their second spot-kick and… dragged wide! Advantage Scotland! Our third penalty taker, looking to make amends for his miss in the quarter final, makes the long walk to take his turn.

A confident walk up, fires low… the keeper has guessed correctly! But the ball trickles agonisingly under his body! 3-1 Scotland! London’s taker lines up to reduce the deficit, it’s a powerful strike. But it’s hit the bar! Elation for Scotland, still 3-1 up! Our fourth penalty taker places the ball. This one to win it. Runs up.. missed! Chance has gone, London have a lifeline. Their player dispatches it with confidence, pressure hasn’t got to him. 3-2. Our fifth and final penalty. This one to seal it, in a carbon-copy of the quarter final against the Portuguese. Runs up… top corner! SCOTLAND ARE IN THE FINAL!!

London look dejected and in disbelief, but we barely notice as we surround the winner, chanting and cheering as though we’ve already won! Guaranteed to be taking a trophy back to Edinburgh now, all the aches and ailments are momentarily forgotten. Nobody truly expected us to get this far. I don’t think we’d even dared to dream it.

This post is part 3 of 4 of a trip I took in June 2016.
Part 1 covers my time in Lisbon itself.
Part 2 covers the opening stages of the CGI Euros.
Part 4 covers the CGI European Championship final.