Along with his scentwork that I wrote about last month, my favourite activity we learned at Charlie’s Progress Training classes was impulse control using a flirt pole. It might be Charlie’s favourite too.

Flirt poles can be purchased specifically for dog training, generally retailing for around £20-30. For training Charlie though, I instead bought a lunge whip (used for horse training) for about £10, and tied his own toys to the end, as recommended by his trainer Karen. The benefit of this is that I can use any of his toys with the game, and I’m not restricted to just those that come included with the flirt pole. There aren’t any other prerequisites to start playing, however despite there being much less preparation required than scentwork, a lot more space is required to get the full benefit for Charlie, so we tend to head to the local park to play this game.

The purpose of the game is to work on Charlie’s impulse control. He lies down on the field, and watches me walk away from him with the lunge whip in my hand. I can shake the toy in front of his face, drag it along the ground, run away from him, shout and sing, dance across the field (warning: this training method makes you look a right knob in public). He will stay perfectly still until he hears his release command (‘go play!’) at which point he will come haring towards the toy on the end of the whip. 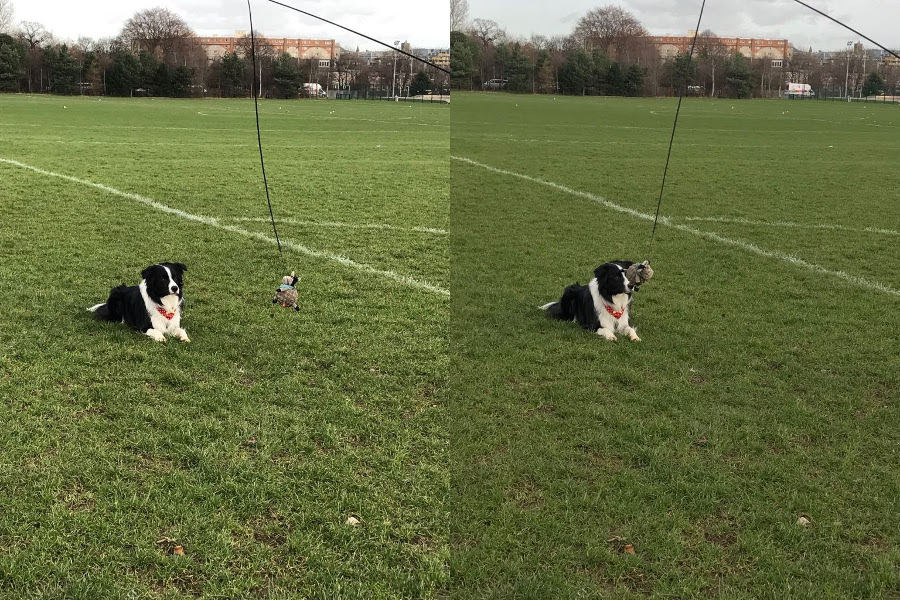 Charlie ignores the toy until he hears the command ‘go play’

When he gets close, I’ll start running and swinging the toy around until he catches it, at which point he gets lots of praise and a tug-of-war game. When he releases the toy, he gets a treat, and then lies down again ready to restart the game.

Generally, we can play this game for about 30 minutes before Charlie gets too tired and loses interest, as it’s a combination of both mental stimulation (waiting, staying calm and controlled, listening for commands) and physical exercise (chasing the toy). Usually we play this game two or three times a week, normally on his shorter morning walk which we almost invariably spend at the park anyway. 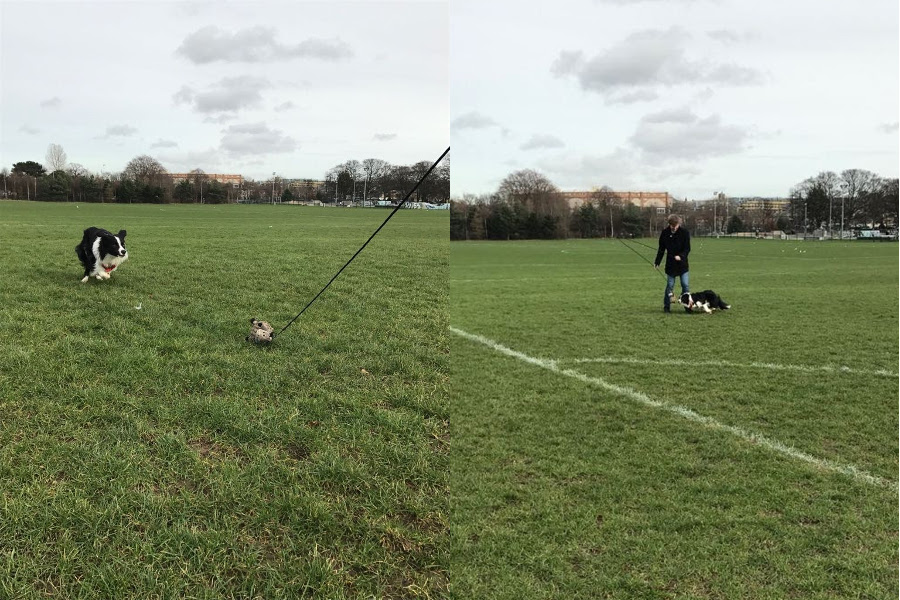 Impulse control can vary wildly between different dog breeds. Charlie is fortunately a breed that tends to exhibit good impulse control, whilst in ‘training mode’ at least, so teaching him this game was relatively painless.

To begin, make sure your dog is actively interested in the toy you’re using. Set up a play session - tug-of-war usually works to get their interest. Once he is paying attention to you, ask him for a sit and a stay, take a step backwards, then just gently swing the toy loosely in front of him (do not let it touch the floor). If he remains sitting still, reward him and give your release command (‘go play’) and allow him to chase and play with the toy. If he doesn’t stay still and moves towards the toy, pull it back towards you (do not let him catch it), and reset the sit and stay and try again. 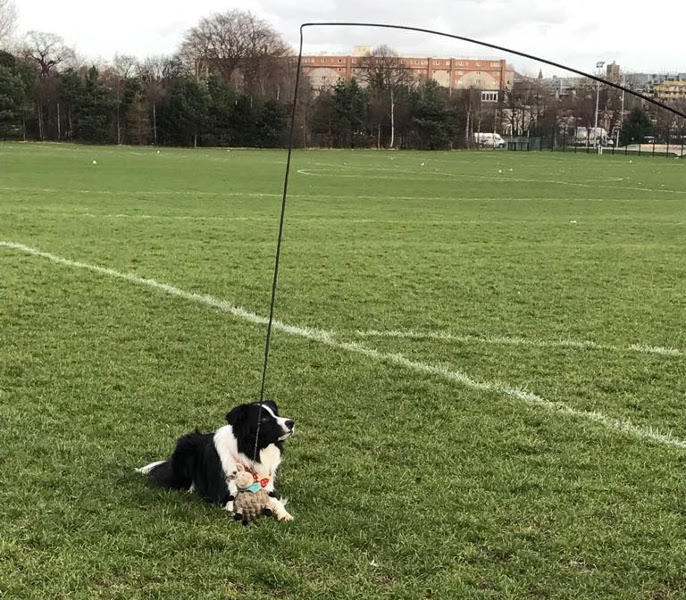 Charlie waiting for me to release him

Once he has the basics down, start doing more and more ‘teasing’ with the toy before releasing him. You can let the toy hit the floor, swing it gently from side to side, drag it around, swing it over your head, etc. Once he understands that he can’t move until you release them, you can dance around like a madman, and he should remain perfectly still. With Charlie, I can get half a football field away before releasing him, and he’ll usually remain calm and wait. Every so often though I will push him too far and he will make a move towards me - when this happens, I stop immediately and return him back to his starting position (I taught him the command ‘go back’ to help with this, meaning ‘return to where you started’). For the next round, I won’t be quite as animated, allowing him the opportunity to redeem himself with a good impulse control.

If Charlie gets bored or tired before the planned end of the flirt pole session, I tend to try a cooldown game of fetch. Probably the easiest game of mental stimulation for dogs, this requires no preparation other than remembering a tennis ball (which is kept in my dog-walking coat at all times anyway). Our favourite place to play fetch is at the local skate park either early in the morning or late at night when it isn’t in use. Running up and down the skate parks chasing the ball helps with the physical exercise Charlie needs, as the mental side of the game isn’t as taxing as the other games we play.

When he’s in ‘training mode’, particularly due to his breed he changes from his bouncy scamper to focused and high alert, and is generally very good at working without being distracted. That said, after a period of mental stimulation, his attention does inevitably wander. This is my cue to wrap up the game; if it isn’t enjoyable for Charlie, he won’t want to do it in future. We started more training sessions with his trainer as of last weekend, so hopefully we’ll be able to add some more games to our repertoire of mentally stimulating activites.