One of the best things we learned at Charlie’s Progress Training classes last year was how to get him interested in scentwork. Nothing else short of a ten-mile hike tires him out quite like a good session of mental training.

A spell of mental stimulation for dogs is twice as tiring as physical exercise over the same time period. Border Collies in particular, with their working background, require a lot of mental stimulation to avoid boredom, which can lead to serious behavioural problems if not addressed. Also, unlike physical exercise, there is an upper limit to how much mental training is required to tire a dog out. Dogs get fitter with exercise and therefore require more and more physical exertion to be content; this is not the same with mental stimulation. Right now Charlie at 11 months of age tends to tire after about 45 minutes of mental training, or about two hours of physical training. Not too different from my own limits if I’m honest.

As mental games go, the scentwork training we do with Charlie requires the most preparation and set up; it’s not something we can do spontaneously if I haven’t already prepared his scenting toys. It’s worth it as an infrequent treat though, so we try to practice his scentwork about once a week. I don’t want him to get bored of the game, but I also don’t want him to forget how to play.

To make his scentwork toys, I went to IKEA and bought some airtight jars and stuffed rats and mice. I ordered some catnip online, and set up the jars to ‘cook’ the rats and mice by layering catnip on the bottom of the jars, placing some kitchen roll on top to avoid staining the toys, and then stuffing the jars with the rats and mice. They then needed to be left for 24-48 hours to allow the catnip scent to infuse into the stuffed toys. 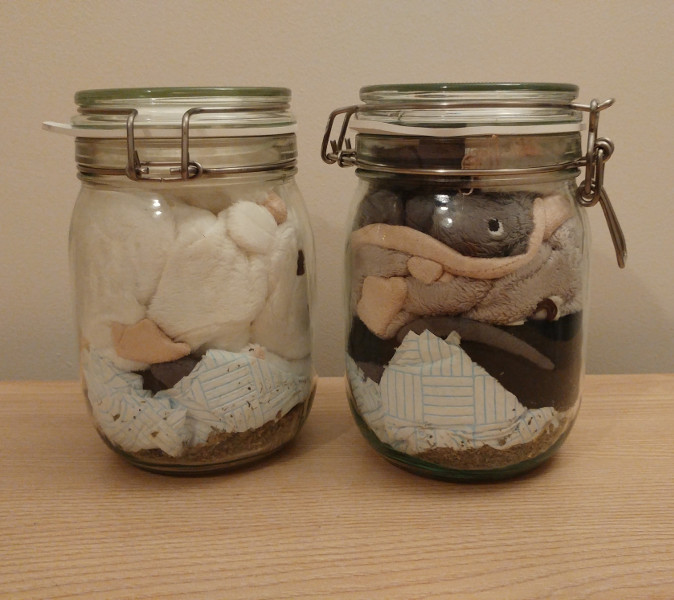 Once the toys are ‘cooked’ in catnip, we can play our game! Charlie sits patiently on the sofa, and watches me wander around the house, pretending to hide the toy in various different places (and actually hiding it in one). When I release him (‘go find!’), he uses his nose to follow the trail through to find his toy, which is usually relatively inaccessible to him; under the bed, behind the radiator, under a cardboard box, etc.

If he’s struggling, I can give him hints (‘this way!’) as to which room to look in. Once he finds the toy, he gets rewarded with a play session, usually tug-of-war with the rat or mouse, and then a treat for releasing the toy to be hidden again. Each rat or mouse can be typically hidden for just two or three games before its scent is overpowered with that of Charlie’s saliva. Once this happens, the toy is moved out of his reach to be washed in boiling water, disinfected, and dried out ready to be cooked again. After two or three toys have been ‘used up’, the scent of catnip around the house is usually too strong to make the game much fun for Charlie anymore, as he keeps revisiting previous hiding places, following old scents incorrectly until he eventually finds the new hiding place.

To start training scentwork, first check that your dog actually likes the scent you’re working with. Fortunately, when I started Charlie with scentwork he absolutely loved the catnip-scented toys. If your dog doesn’t like catnip, you may need to try a different scent, or alternatively try with food rather than a scented toy.

Start off simple so your dog understands what is expected of him. Show him the scented toy, then throw it a few feet away. When he moves towards it and pick it up, give the command you want to use (e.g. ‘go find’) and reward him with a short play session. Ask him to drop the toy and repeat two or three times until he understands.

Once he has the basics, introduce an obstacle to the game. We used a cardboard box to start with for Charlie, but any opaque object of sufficient size will do. Ask your dog to sit and stay on one side of the box, or have someone hold him on a leash, and let him see you hide the toy behind the box. Stand up and give your command. Your dog should make a beeline straight for where you hid the toy. Reward them again with a play session and a treat, then repeat a few times. 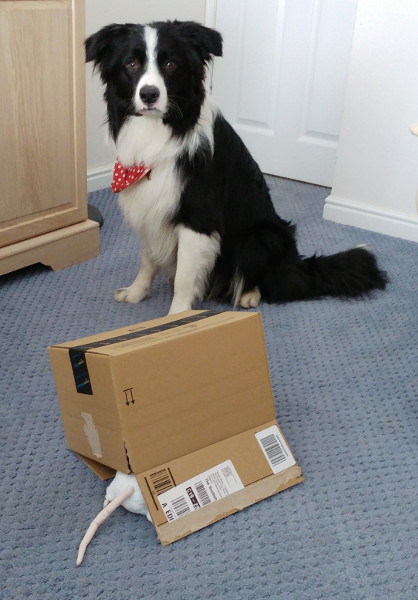 Charlie waiting for the command to retrieve his scentwork rat

Continue increasing the difficulty for your dog, first by adding a second box and allowing him to see where you hid it, then hiding it behind a box without him seeing (a second person to keep him distracted works well here), then hiding it behind multiple boxes/obstacles or other rooms, until such time that they’re confident going to find the toy wherever you hide it.