Following the theme of my other coffee maker reviews, I figured I should write about probably the most well-known and ubiquitous coffee maker currently sat on my shelf; the cafetière, or French press.

I’ll be up front and honest here, the French press is pretty low on my list of favourite coffee makers. I probably use my version of the cafetière maybe once a month; it’s very far from being my everyday coffee maker. Possibly surprising, as I have very few complaints to level at the French press. It definitely does the job well enough, it’s easy to use and clean, and produces a vibrant, albeit not clean, cup of coffee.

Oddly enough, the original patent for a French press filed was by an Italian, not a Frenchman. Designer Attilio Calimani claimed the patent in 1929, although many places credit an unnamed Frenchman for the original design. Since then, countless variations of the cafetière have been developed and produced, in various materials (glass, steel, plastic), colours, sizes. The version I have is the 1L borosilicate glass 8-cup Kenya model produced by the Danish kitchen company Bodum. 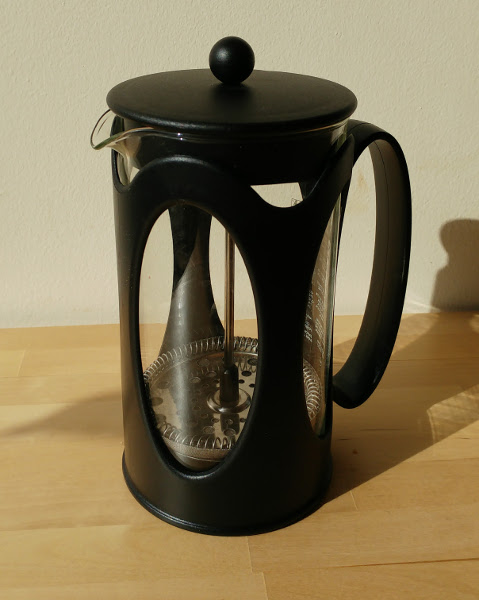 Other cafetières vary from a single-serving travel size press, to a massive 12-cup 51oz version. Fortunately, the recipes scale nicely as this is a steeping brew (rather than a filter), so whatever size you’re using the recipes will remain unchanged.

The French press is relatively forgiving with brewing parameters; probably the most important factor is allowing a sufficient brew time - trying to cut the brew time will not yield good results. You also don’t want to use a fine ground here, or you’ll not be able to press the plunger through the grounds, they’ll just clog the filter entirely. A coarse, even ground is what you should use. The coffee/water ratio is hotly debated in the coffee world, ranging from a strong 10:1 to a lazy-Sunday weak 20:1 (that means 10-20g of water for every 1g of coffee grounds). That’s a huge range. Personally, I like to stay in the 14-15:1 range - adjust this to your own tastes.

First, grind and weigh out your coffee. For my Kenya cafetière, I use about 65 grams of coffee, which corresponds to about a 15:1 ratio. Pour all of the coffee grounds into the empty cafetière.

Like most coffee brewing, you want the water to be around 90°C to start with - this is about 30 seconds after your kettle has finished boiling. I’ve never found it necessary to use a gooseneck or temperature controlled kettle for the French press, a standard kettle works perfectly well. Some recipes will use a pre-brewing bloom here, pouring roughly double the amount of water to coffee intially (so for mine that would be 130g water). I’ve never found that made any difference though, simply pouring all of the water in a slow controlled manner works fine. Usually, however well you pour, some of the grinds will float ‘dry’ on top of the water. Once you’ve finished pouring, simply stir the top inch or so to ensure all grinds are covered. You may want to use a wooden spoon for this if you have a glass French press, as there have been reports of metal spoons cracking the glass. I’ve never had this issue, but probably something to keep in mind. Once stirred, place the plunger on the top of the cafetière, but do NOT press. This is just to keep the heat from escaping. 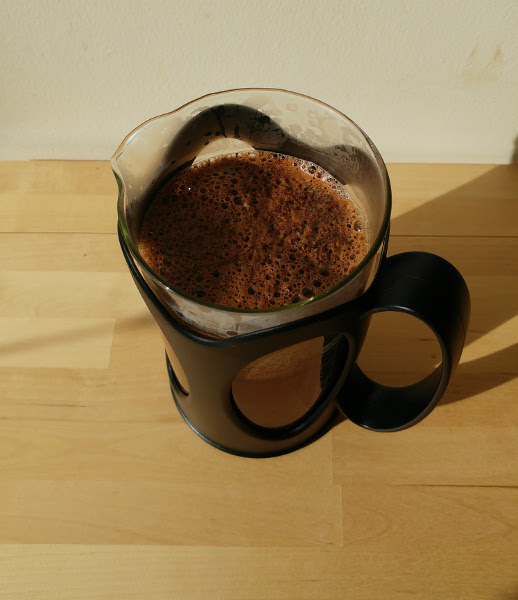 French press brewing and waiting to be plunged

Wait four minutes. No more, no less - at least not at first. Four minutes is far an away the most common brew time, so start there and experiment up or down depending on if you feel your brew is too under- or over-extracted. Some people are happy with a short 2-3 minute brew time; others swear by six minutes. Once the time is up, start plunging. You should feel some light resistance, but not too much. Too little, and you have too coarse a grind. Too much, and you’re too fine. The press should be slow and controlled, lasting maybe 30 seconds max.

After pressing, pour out the coffee immediately, or it will continue brewing in the chamber. I personally would leave the last 150ml or so in the chamber, and also the last mouthful in each cup. The French press leaves a lot of sediment, and while there’s no harm in drinking grinds, I find the gritty texture unpleasant, so I avoid it where I can. 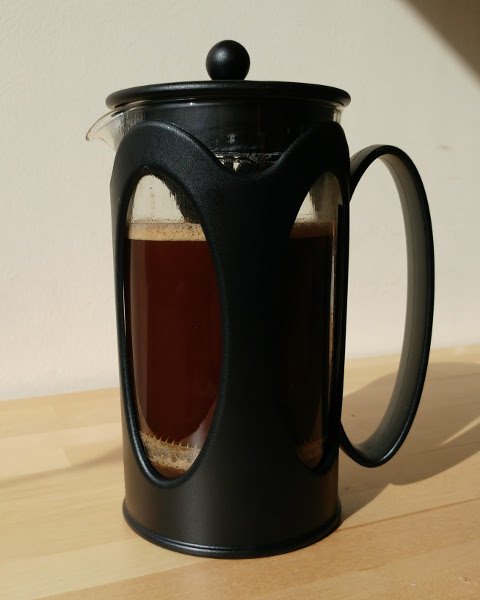 Cafetière after being pressed

Not my favourite brewing method, but for a decent quality cup for minimal effort, particularly for multiple people, there’s not much to really complain about. Yes, in my opinion, there are better brewing methods, but that’s not to say you can’t get consistently great results with a French press. 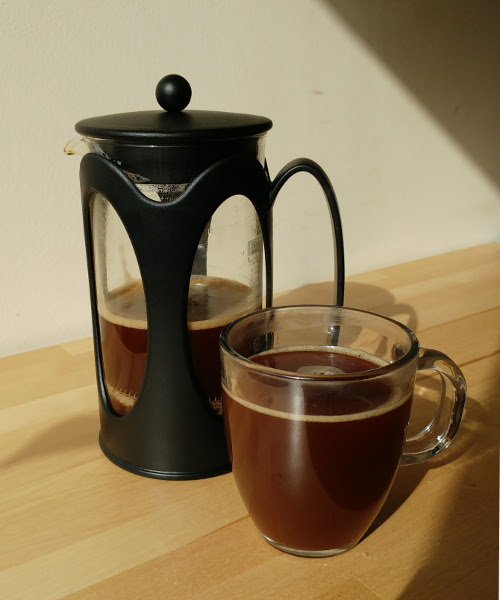