Around this time a year ago, I donated $80 to the It’s American Press’ Indiegogo campaign - and then largely forgot about it, until my reward of a shiny new American Press arrived at my door last week.

Following on from my AeroPress article last weekend and sticking with the coffee theme, I figure I should confess something - when I wrote the AeroPress article, it’d actually been more than a week since I’d last used the AeroPress, probably the longest I’d gone with without using it since the day I bought it. The culprit for this; my new American Press.

The Press was delivered two weeks ago (after forking out nearly £20 for Customs charges, as the American Press team are based out of Chicago. Damn you, Royal Mail), in an unassuming, but heavier-than-expected, cardboard box. Unlike the AeroPress, there are no accessories with the American Press; the box contains just what is needed, all of which is entirely contained within the carafe itself. 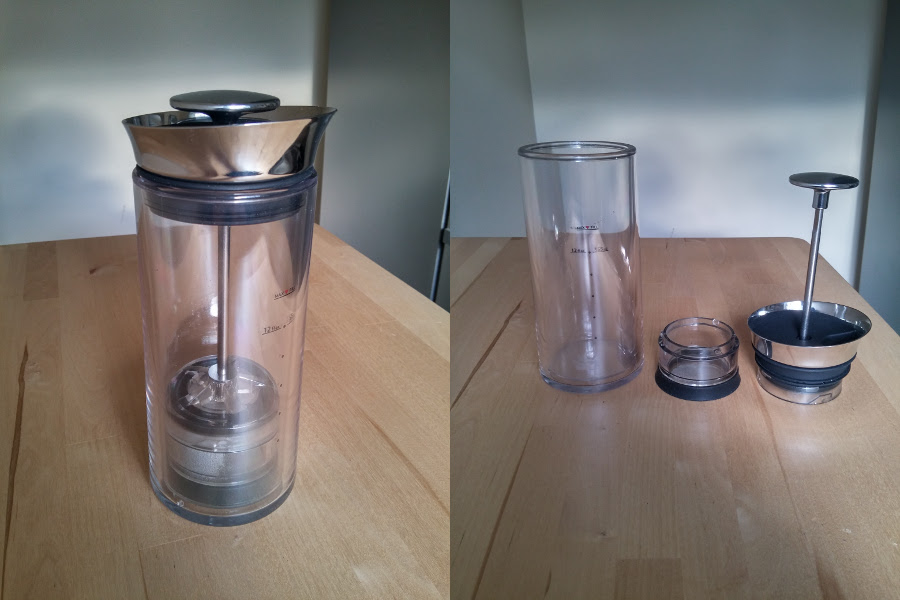 The box contains everything that’s necessary and nothing that isn’t. (Left: the assembled American Press. Right: separated into the main three parts: carafe, pod, and press)

There is a solidity behind the American Press that gives the impression of real quality. It’s a little bigger than I imagined it would be, given that it is a single-server coffee maker, but I suspect a lot of this is taken up by the pod space, as well as the thick, vacuum-sealed carafe. You can see the labour of love that has gone into this design, and the many revisions that have been undertaken to produce the final product.

Overall, it’s a very pretty piece of equipment all told. I think my Chemex just edges it on the aesthetic scale - but really, I’m judging it on the coffee it produces, not on how it looks on the shelf.

There is a small instructions insert included with the box - not that it’s really necessary, the American Press is fairly intuitive to use, but the hints as to grind size and brew time provide a good base to start with. As I’m still exploring and experimenting, I haven’t really fully tested the waters just yet, although I’m fairly happy with my current method of one minute and 15 seconds infusion, with a 45 second press time, using a French-press-style coarse grind with around 22g of coffee. The double-filter pod that the American Press uses is a good size for this amount of coffee, and even a fully level pod bottom retains enough space in the lid to allow a clear press. 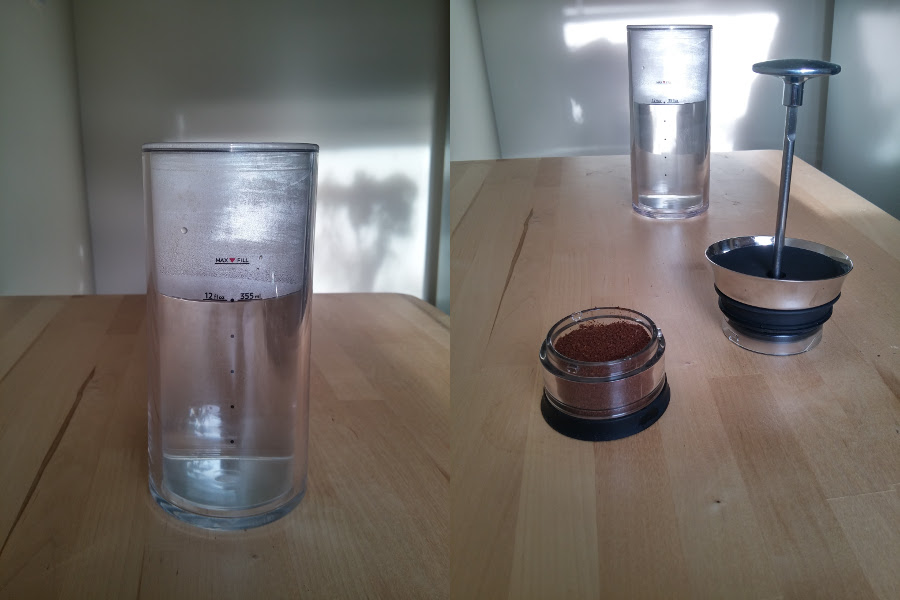 First, you fill the coffee pod with ground coffee, then clip it into place on the main press pole. Fill the carafe with hot water up to the 12oz line, and insert the press so it just reaches the water line, ensuring the lid is firmly in place. Next, push gently down on the press, until the very first trickles of coffee flood over the top of the pod. Stop here; let the coffee grounds pre-infuse for however long you need.

After pre-infusion, start pressing slowly and consistently down on the press, as the coffee flows over the top of the pod. There’s a water-into-wine, Jesus-coffee-brewer metaphor here somewhere, but I’m not going to try and find it. Press all the way down to the bottom of the carafe. 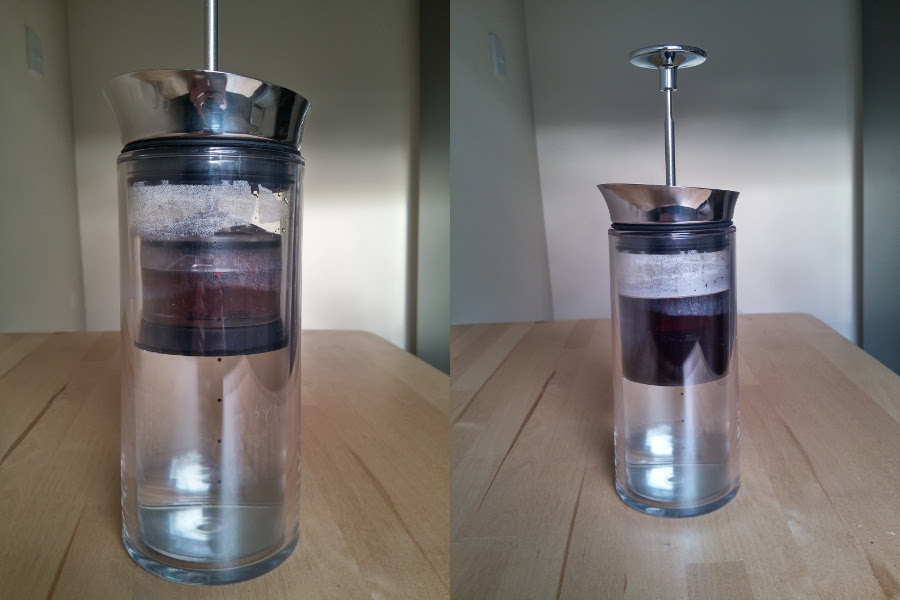 Once you’ve reached the bottom, pour the coffee out into your cup. Unlike a French press, the coffee won’t continue to brew as long as the American Press remains steady, but movement will cause some of the coffee to move back into the pod, so best to pour it ready to drink straight away. Also, like a French press, you may find that you have some sediment in the bottom of your cup. It won’t be anywhere near as much as with a French press, and if you’re using a consistently coarse enough grind it won’t be an issue, but it’s something to be aware of when selecting grind size. 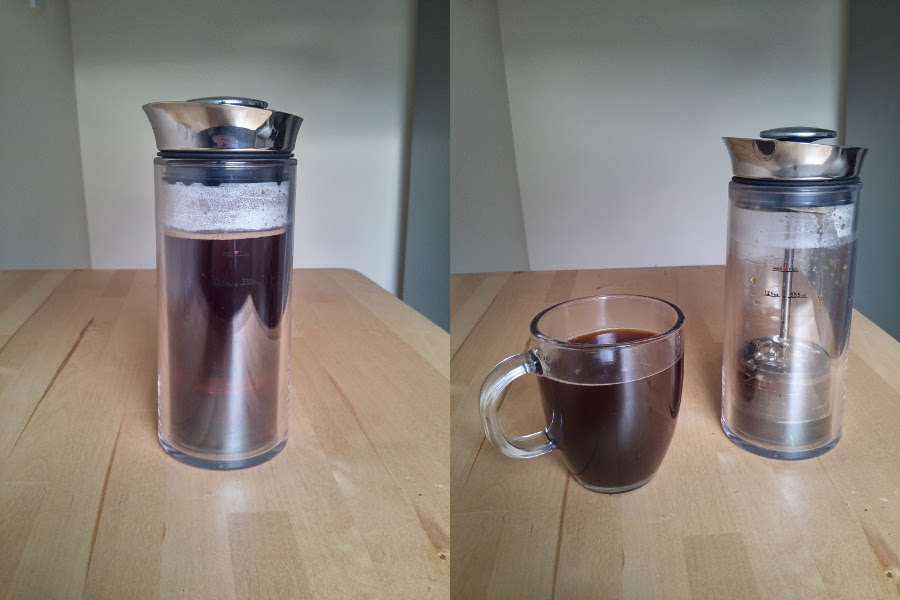 Honestly, the American Press makes an outstanding cup of coffee. Like my AeroPress (and frankly unlike my Chemex, French Press, and V60) I’m yet to make a bad cup of coffee; although I have had it only two weeks, there’s still plenty of time to screw up.

As the entire American Press fits completely within the carafe, it’s the most portable coffee maker I own (despite it’s size), as there are no loose components to carry around too (like the AeroPress filter cap / stirrer, or the Chemex filters).

One downside I will note though is that it’s not the easiest coffee maker to clean, and for me that’s quite a major downside given the emphasis of the American Press tagline “press without the mess”. It’s not to say that it’s difficult per se, but disassembling after brewing is fiddly, particularly as the metal components get extremely hot (obviously, you just immersed them in near-boiling water). A simpler way to detach the pod would have been nice, as the only way to do it now is by holding the metal stem of the press (very hot) and twisting the pod itself (also very hot). If you could twist the pod handle (not hot) rather than the stem that would be an improvement, but doing so just unscrews the stem, leaving the pod in place.

It’s also not the easiest to dry, given the fiddly detail of the pod itself, particularly the lid. At home that isn’t an issue, as I can just leave it to air-dry, but at work where I need to dry it quickly with paper towels and get back to my desk, it’s time-consuming and awkward.

These issues are far from deal-breakers, but they’re a little frustrating given the expectations set by the American Press tagline. They may, however, be enough to stop me replacing the AeroPress as my daily brewer. We’ll see how that goes.

Now, like every other time I’ve written about coffee, I feel like I need another cup. I’ll see if I can finally make a bad cup with the American Press, but something tells me that won’t be the case.